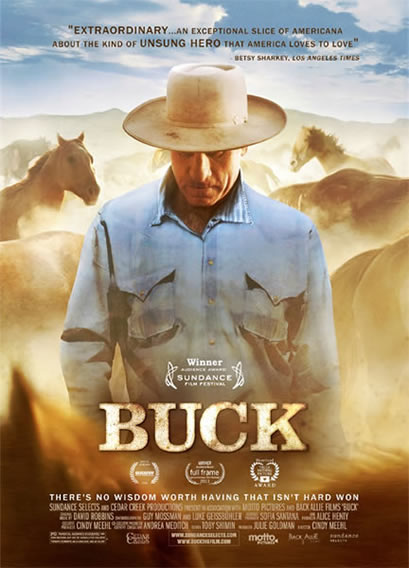 What are the qualities of a horseman?

As someone who is seeking what’s best for your horse, you’d probably agree that there are a lot of trainers in the world, but few horsemen.

So what’s the difference?

I’ve touched on this subject many times in my articles but, in a nutshell, a horseman is flexible in his approach to horses, and will put the horse first despite peer pressure, ego, and counter-productive emotions.

A horseman understands and takes to heart that any “issue” with a horse is usually not about the horse at all; rather, it’s about what the horse is reflecting back to you.

The longer you’re around horses, you’ll come to realize that a horse will eventually cause you to feel every emotion imaginable.

Controlling your emotions is the biggest challenge for a horseman.”  ~Buck Brannaman

Not Your Typical Documentary

Buck Brannaman beautifully demonstrates the qualities of a horseman as he brings to the big screen an incredible educational documentary about horse-human relationships in the film, Buck.

I saw this film its opening weekend in the Dallas area and since I’m a native Texan, I was happy to learn that the idea for the documentary originated in Texas.

Even if you’re not a horse guardian, you’ll love this film because it’s not so much about horses as it is about your journey in life and developing as an individual.

If you’re a horse guardian, you’ll find that the film brought to life some realities of horse-human relationships and the results produced when something goes horribly wrong with your approach to horses.

There are many things I love about this film and I was especially pleased with the question and answer session right after it where Buck Brannaman made a live appearance.

During that session, we learned much more about Buck and his journey than what was included in the movie.

Although Buck obtained a large portion of his knowledge about horses from other great horsemen such as Ray Hunt and Tom Dorrance, the special qualities he’s developed throughout his life allow him to effectively communicate not only with horses, but also with people.

Throughout the film you’ll find Buck Brannaman to be a kind, gentle soul with a great sense of humor.  He has an uncanny way of educating people about horses with a humble approach that helps the audience understand the important lesson that horses are a mirror to your soul.

A powerful and memorable statement from the movie says it all:

Your horse is a mirror to your soul.  Sometimes you might not like what you see… sometimes you will.” ~ Buck Brannaman

As Buck points out throughout the film, it’s not about the horse. It’s about you as an individual and where you are in your journey.

There were many moments in the film that were captivating, but the one that resonated with me most is the beautiful dance Buck demonstrated with his horse… it’s a treasured feeling and a beautiful picture that will always be with me.

As Buck stated in the movie, “It should be a dance with your horse.”

All great horsemen understand that it’s important to find that balance between being as gentle as possible but as firm as necessary.

In the end, it becomes a dance between two willing partners.

Nothing is ever forced, there’s connection and understanding and the horse’s dignity stays intact… it’s not compromised.

Touching Lives at a Magnitude Unimaginable

If you’re a horse guardian seeking true unity with your horse, then this film will be one more piece of the puzzle that gets you closer to that ideal, not only with your horse, but also with important relationships in your life.

It’s refreshing to see a film like this reach such a large number of people.  The messages about not only horses but about personal growth and development are presented in a way like no other.

Buck travels around the country putting on horsemanship clinics as one way to help spread the messages he communicates through his film, Buck.  Bringing this film to theaters has given him the opportunity to touch lives at a magnitude he probably never imagined.

You hope you say the right things to plant a seed and hope that they find the answers in their life.” ~ Buck Brannaman

No matter where you are in your journey with horses, this is a must see film.  Be sure to bring all your non-horsey friends and family too… they’ll thank you for it.  🙂

In closing, I’m going to leave you with another great quote from Buck the film:

Whether you have horses, dogs or kids, with that comes a great responsibility.  You have to be able to teach them to get along in the world.”  ~ Buck Brannaman

Note:  I did my best to extract quotes during the movie but writing in the dark was a challenge.  If any one sees that I misquoted something, please let me know and I’ll correct it.

Other DVDs by Buck Brannaman

You can’t go wrong by adding this wonderful film to your horsemanship library.

Photo Credit: All photos in this article came from buckthefilm.com.