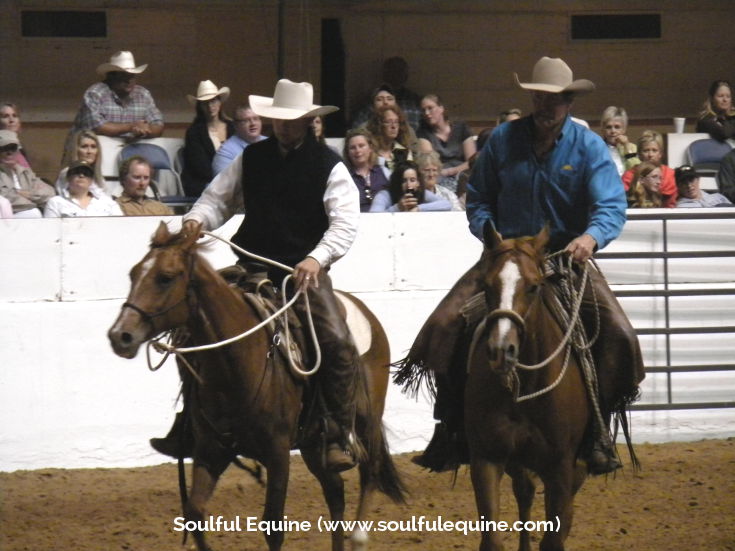 As a savvy horse guardian, you know how important it is to establish a great relationship with your equine companion.

When you were young, did you love watching cowboy heroes such as Roy Rogers and Trigger, Gene Autry and Champion, and the Lone Ranger and Silver?

I don’t know about you, but I loved it when Roy was in trouble and he whistled for Trigger who came running to help. What a partnership!

Can it really be that way with your horse?  Is it possible to develop such a deep level of understanding and communication that then builds into a strong partnership?

I’m here to tell you that it is possible, but in order for it to happen, it’s important to first understand horses from their point of view.  It’s also our responsibility to prepare them for being in a human’s environment.

The grim reality is that the majority of horse people and their horses don’t fit this model.

So how do you build such a partnership?  Where do you start?

It often begins with a horse at a very young age.  Most times it starts during their first interaction with humans; for example, when it’s time to start them under saddle.

On May 6, 2011 I attended the first day of a memorable three day event called Parelli Colt Starting Naturally in Fort Worth, Texas.

When I mentioned we were attending this event to a somewhat non-horsey friend of mine, he replied with,

Judging by its name, the Fort Worth event evidently is focused on getting colts off to a good start in life… so certainly well worth the time.”

I couldn’t have said it better myself.

First to clarify, the word “colt” is sometimes a confusing word for people.  The actual definition is a “young male horse not more than 4 years of age,” however, many times it’s used as a catch-all term in the horse industry for a young horse that’s either male or female.  The majority of horses started at the event were geldings but a few were fillies.

Starting a young horse involves an important formula for acceptance.  Pat Parelli’s formula is as follows, and in this order:

You may be thinking of those old westerns where the cowboy gets on an untouched bronc (anyway he can) and hopefully stays on the horse until it quits bucking.

Many times the horse or rider are killed in the process if not done properly.   One thing that was pointed out at the event was…

More people are beginning to realize that it doesn’t have to be a traumatic experience for a young horse.

Colt starting done naturally is nothing like that.  It puts the relationship with the horse first and it builds trust, respect and connection in the process.

Over the years, I’ve learned to reprogram myself to not use the words “break” or “broke” and “horse” in the same sentence.  Traditionally speaking, people in the horse industry are programmed to use those words.

Keep in mind that words are very powerful.

The word “break” and “broke” have a negative connotation when related to most anything.

I don’t know about you, but I’d prefer not to have a “broke” horse… especially a “well broke horse,” which to me basically means a mindless robot.  Instead, I’d rather have a well-developed partner in mind, body and spirit.

So the next time you hear someone use the words “broke horse” or “breaking a horse”… correct them.

With all that being said, I choose to consistently use the words “start” or “starting.”

A good sign is that the horse industry is beginning to change their vocabulary as well.

Who is Pat Parelli?

You may be wondering… so who is this Pat Parelli guy?

First of all, he’s a master horseman who has over 30 years of experience starting colts.

For those who don’t know this bit of trivia, in the mid-1980’s, Pat Parelli coined the term Natural Horsemanship.

Pat didn’t invent natural horsemanship, and he’ll be the first to tell you that this stuff is so old it’s new again, but he did coin the term and take the knowledge of his mentors and put it into a format that the average horse person can follow.

If you have anything to do with horses, you’ve probably heard or read about natural horsemanship.

So what is so natural about horsemanship and why would you put those two words together?

The “natural” part is basically… do what horses do with each other in order to build rapport, respect and connection.  As for “horsemanship,” Pat Parelli formed his own definition of this term:

Horsemanship is the habits and skills that both horses and humans need to become partners.”  ~Pat Parelli

Anything good, in the wrong hands, can get a bad reputation.  So if the results you’re getting with your horse don’t demonstrate the combined beauty of rapport, respect and connection, then you’re not doing natural horsemanship.

A partnership is not just a one-sided relationship, rather, you’re sharing and understanding ideas and you each have mutual responsibilities.

In case you’re wondering, horses can be responsible if allowed (this doesn’t mean robotic), otherwise, you wouldn’t have much of a chance at achieving a partnership.

The Parelli Colt Start event consisted of 16 horses and eight Parelli professionals.  Pat Parelli coached each professional when needed and stepped in when necessary.

The most creative part of the event was that the 16 horses came from different backgrounds. The horses were grouped by how much human interaction they’d had prior to the event.

The morning sessions consisted of 8 horses who were familiar with humans.  Five were Atwood Ranch performance raised horses from California who had gone through the Parelli Pre-School Program.  Three were backyard / farm raised and had some human interaction.

The afternoon sessions consisted of 8 horses who were ranch-raised by the legendary Pitchfork Ranch in Texas. The only experience they had with humans was being run in to a chute and vetted and they had never been haltered.

Most people would assume that the horses that had been handled the most would be the easiest.  The Atwood horses who went through a solid pre-school program where exceptional.  The three farm-raised horses, in the beginning, were more difficult.

What I loved most about this event is that Pat Parelli and the Parelli professionals stayed true to their natural horsemanship principles.

Keep in mind a person seeking excellence with horses learns from each and every horse they encounter.  To that type of individual, the horse is their best teacher.  In the case of the colt start, I’m sure each Parelli professional gained a higher level of knowledge as it relates to starting young horses.

With all the different colt starting demonstrations going on these days, I was happy to experience such an exceptional event.  In my personal opinion, this exhibition far exceeded other colt starting demos out there.

The reason… it puts the horse first.  This is not always the case with most other colt starting events.

Sometimes it’s those subtle statements made by masters in any field that are the most powerful, and one such statement from this colt start that really stuck with me was:

I’m not going to criticize what other people do, but I’m going to demonstrate how I would do it.”  ~Pat Parelli, Colt Starting Naturally, Fort Worth, TX , 2011

Since I love horses so much and I honor them as the noble creatures they are, I tend to become irritated at those who think of horses as disposable objects and not as partners, especially when it’s the accepted norm in a large portion of the horse industry.

Those words really hit home for me.  I talk a lot about setting good examples and that’s what Pat Parelli is striving to do with events like Colt Starting Naturally.

Some people don’t think much of Parelli Natural Horsemanship, and if you’re one of those people, I hope you at least take away from this article the importance of always putting the relationship with your horse first.

This is easy, but it’s not simple.  Why… because you’re human.

So, rather than work with your horse, think about it a little differently…

Play with your horse, but work on yourself.” ~ Pat Parelli

Right before my eyes, I saw immediate results with young horses.  It goes to show that the more skilled and knowledgeable you become, the more efficient you become.

Many people overdo it with young horses.  Parelli’s core principles and concepts set a great example at this event, demonstrating that it’s not necessary to run a horse around in a round pen to the point of exhaustion in order to accomplish something.

I loved that Pat Parelli intentionally went out of his way to make this point.

Not only that, the approach they used to halter the horses who had never been haltered was gentle and subtle… no need to catch them using a lariat rope.  It was done beautifully.  The technique used was unique and creative and I’ll always remember it.

There was so much great information shared during this demonstration that I can’t cover it all in a short article, but I hope I’ve given you enough of the highlights to think more about your relationship with your horse… no matter how good you think it is now.