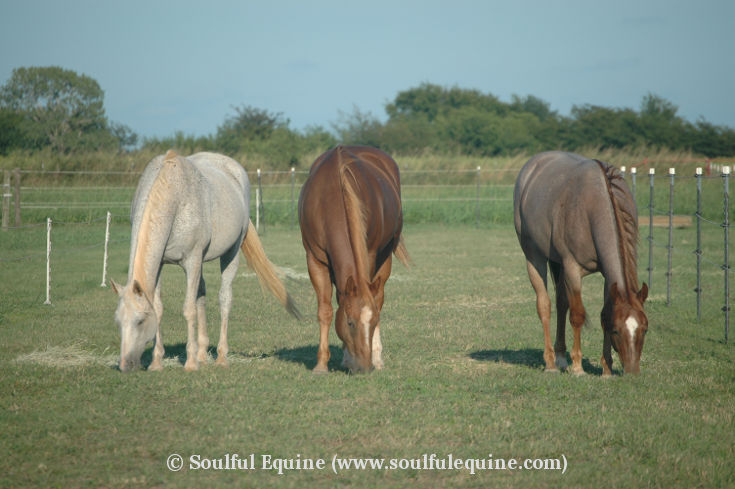 Faith, Dillon and Ransom are the primary Soulful Creatures™ who have taught so many lessons beyond what most could imagine. If you’re open and your listening this is the same for your horse. Soulful Equine is their voice. Enjoy their stories below. 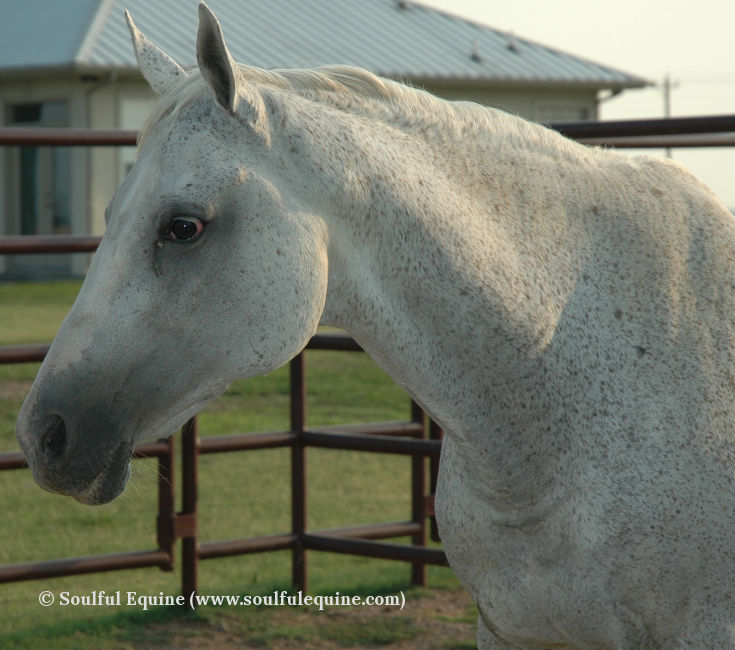 Faith is a beautiful flea bit gray Appendix Quarter Horse (QH) mare, born February 1986.  She’s a retired racehorse and it’s been a challenging journey with her. Faith has been a special part of Stephanie’s life since the summer of 2000.

Faith was in her mid-teens when the two of them met.  By then, a lot of damage had been done to her not only from a physical standpoint but also from a mental and emotional one.

Basically, Stephanie was not aware of the extent of Faith’s damage until several years later. The more she learned, she realized changes needed to be made or Faith may not live a long, quality life.

As the years passed, Stephanie came to understand what the term bleeder meant in relation to horses. Faith would show bleeding from her nostrils. Over time, through change in diet, trial and error, Stephanie now has Faith’s bleeding under control using high quality nutrition and natural horse care strategies.

Being an appendix QH, Faith is also difficult to keep weight on, especially the older she gets. She’s doing great despite the challenges involved. From a hoof care standpoint people usually say that the foot has been bred off of our horses. This is a common thing to hear in relation to Thoroughbreds. People think that by default Thoroughbreds have thin walled hooves, which is not true.

Since Faith loves to move it keeps her healthy and feeling younger. The natural boarding arrangement she lives in provides lots of movement and she loves it.  This allowed her to develop sound healthy hooves as well as a healthy mind and spirit.

Faith has been another one of Stephanie’s greatest teachers. She’s a loving companion that will always be cherished and her name says it all, Faith.

Unfortunately Faith passed away in February of 2013 at the age of 27. Despite all the unhealthy baggage from her past, she lived a healthy quality life during the 13 years she was with me. She is deeply missed. No amount of gratitude could be enough for the abundance this horse brought to my life. She will always be one of the horses of Soulful Equine. Her spirit lives on with me each and every day. ~ Stephanie Krahl 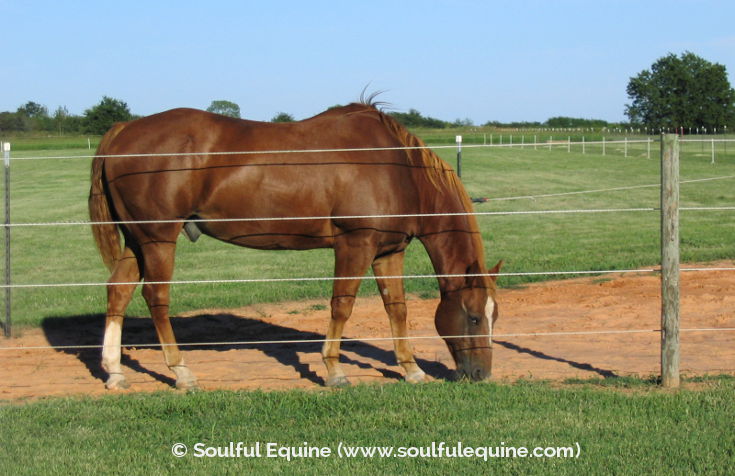 Dillon is a beautiful sorrel QH gelding and he was born in April 1989. He came into Stephanie’s life during the fall of 2000 –  not long after Faith. Dillon is a big stocky horse who used to help pony horses on the racetrack. He’s also one of those types of horses who’s great for anyone to ride and to be around because he is just a safe kind of horse. He has a low spirit level and is such a kind-hearted gentleman, when he wants to be.

Dillon also came into Stephanie’s life, as did Faith, when he was in his teens. Much damage from a physical standpoint had already been done by that time. From a mental standpoint, Dillon is the kind of horse who internalizes things. He’s extremely introverted.

It didn’t take long (about a year) before Dillon started to have an “off-ness” at the trot, almost like he had an old injury to his shoulder. As time went on Dillon had more and more problems and it became difficult to keep him sound. The farrier at the time felt that he needed corrective shoeing to deal with this problem. Dillon went through the conventional corrective shoeing methods, which are still applied today by farriers, and nothing worked.

Some of the last shoes he had on were bar shoes and those came after shoes with pads.  Each time he was shod it become more expensive.  The sad part about it is none of it remotely helped.  After a long journey and a lot of research, Dillon is now a happy barefoot horse. He’s the horse who forced Stephanie to look for other options which resulted in her completely embracing the power of allowing a horse to remain barefoot.  As a result, Stephanie got formal training in natural hoof care.  Since then there was no turning back.  That was more than 11 years ago.

Dillon was a difficult case because it wasn’t just about pulling the shoes.  He was laminitic and not sound.  Now he’s a happy barefoot horse who gets a lot of movement, a relatively natural diet,  and being an introvert he receives a lot of additional emotional care and understanding. 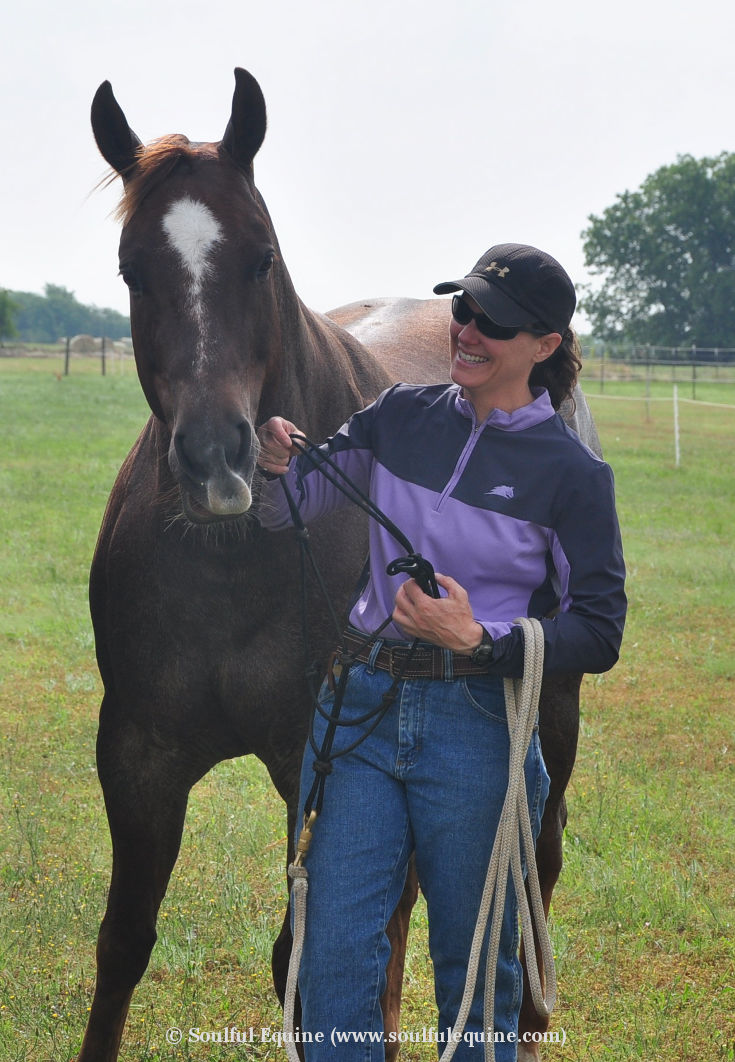 Stephanie Krahl and her horse Ransom

Ransom is a beautiful red roan QH gelding and he was born in May 2006. As Dillon and Faith started to grow older Stephanie knew she needed to start looking for another horse to add to the family. This time the plan was to obtain a horse with little or no baggage from both a physical, mental and emotional standpoint.

In May 2007, Stephanie met Ransom. At that time his name was Levi, but that name didn’t fit him. The picture on Stephanie’s About Page is of the first time Ransom and Stephanie met. It was their first hand shake so to speak. Stephanie knew the minute that little guy came walking up to her in the pasture that it was a match.

Something told her “this is him, this is the horse I’ve been waiting for all this time.” The funny thing is that Stephanie had gone over to look at this horse with the full intention of not yet buying. She had intended to wait another year, but little Ransom just captured Stephanie’s heart.

If you ever meet Ransom, you’ll probably realize that he’s one of the smartest horses you’ll ever get to know. He loves to smile for treats or for the camera, loves to pick on his buddy Dillon (Dillon allows Ransom to get away with a lot), and he’s the kind of horse that can figure out almost any puzzle.

Ransom was a year old when Stephanie purchased him. All he knew was how to lead a little. Stephanie’s intent with this horse was to start from the ground floor and raise him using only natural horse care principles and never allow him to accumulate any kind of negative baggage.

Those principles include but are not limited to: remaining a sound barefoot horse, getting plenty of movement using a natural boarding arrangement, fed a relatively natural diet, use no chemical dewormers or unnecessary vaccinations, use only Natural Balance Dentistry for a balanced mouth that also promotes fabulous body mass, do not start him under saddle too early, allow him to experience plenty of companionship and never allow him to know what it’s like to encounter a “bad human.”

As of the year 2014 this outline has been a success. The only person who has touched his mouth from a dental standpoint is Spencer LaFlure.

Stephanie Krahl started him under saddle and she allows no one to touch him unless they’re savvy with horses and understand horse behavior. Even then she’s still very particular about who handles him in any manner. Stephanie’s also the only one who has trimmed Ransom’s hooves since he was a yearling.

It’s important to be protective of your horse in this manner because horses learn something each time a human comes in to contact with them. The lesson could be good or bad which results in a lasting impression in that horse. In most cases the outcome is bad, so be very picky who you allow around your horse!

Pictured above is a horse who has been raised in this manner since he was a yearling. He is now 8 years old.

All these principles are what Soulful Equine stands behind and Ransom is one of the few horses in the world who has benefited from such a profound reversal in horse keeping. Conventional wisdom has been tossed out the window! Only naturally minded principles that work with Mother Nature in a sustainable manner are implemented.

The result?  An equine partner who’s not just another sick, domesticated horse but rather one who thrives despite domestication.