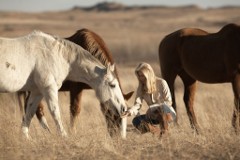 A little while ago, we wrote an article called Protecting The Wild Horse – A Symbol Of Our American Heritage.  Whether you read that article or have simply tuned in to recent newscasts, you’ve probably heard about the plight of the American Mustang and the roundups that are being done by the Bureau Of Land Management (BLM) in the name of “saving these poor, starving, dehydrated creatures”.

Reality, however, proves time and time again that the overwhelming majority of these horses are healthy and strong on the range, and it’s only AFTER they are run ragged by low flying helicopters and herded into small pens where they are often held for years, that they become sick and dehydrated and sometimes die.

Of course, the BLM doesn’t want you to know that, but Madeleine Pickens does.

Whether you think the government is performing this inhumane operation because of a gas pipeline installation that will cut  through northern Nevada, or because cattlemen are secretly paying them to use the land to graze their cattle, one thing is for certain… it is NOT about what’s best for the horses.

Madeleine Pickens has been working continuously for the past two years to get the word out.  But she isn’t just an activist who wants to point fingers and lay blame.  She has a solution.

One hundred years ago, there were 2 million wild horses roaming freely.  Today, thanks in no small part to the BLM roundups, maybe 20,000-30,000 still exist.

Most people would agree that’s bordering on extinction.

The BLM is attempting to change the grazing rights on the BLM managed land to mainly cattle.  This, of course, would leave the horses homeless.

The meat associations in this country carry tons of weight.  If they can take the USDA to court and win a fight to keep them from shutting their contaminated facilities down, then they can manage to move some horses off of public land they think they need for grazing.  If you find this unbelievable, you can read more details in our article Food, Inc. – A Movie Review And Recap.

So the BLM has been rounding up thousands of horses and placing them in holding facilities.  Over 11,000 are currently in short-term holding facilities standing butt to butt… unable to exercise or roam freely.

To make this unbelievable process even more so… this is costing we taxpayers $40 million a year.  If the current practice continues, by 2012 the total funding required will be $80 million.

Madeleine Pickens has an alternative that will save the taxpayers tremendous amounts of money.  She has recently purchased land (with her own money) in northern Nevada on which she plans to build a wild horse sanctuary.  Her plan is to then donate it to a non-profit foundation, add public range land and create an eco-tourism center where the horses that
are already living in captivity could go to live and roam freely.  The combined property would encompass more than 900 square miles.

In addition to saving the lives of horses and saving taxpayers money, Madeleine plans for this sanctuary to be a “living museum” where families can visit and stay while they learn about Native American culture and watch the wild horses roaming freely.

When asked by one interviewer “What’s your concern if you can’t make this work out with the government?” Madeleine’s unhesitating reply was

“I’m going to make this work.  This is divine intervention.  No question it’s going to work.  I’ve been on it for two years.  There’s no question it should have never taken this long, but the government’s going to have to listen…”

What Can We Do To Help?

So how can we all help the Mustangs?  Madeleine has made it as simple as clicking a button on her website.  But it’s even better than just helping the horses… it’s going to be amazingly symbolic.

Madeleine has promised to HAND-DELIVER every single letter that she receives directly to Washington DC via her Pony Express.  That’s right, Madeleine will ride into DC on one of her beautiful Mustangs and make sure our letters are received.

We have all sent thousands of letters via fax, email, and USPS to our Government officials. Even to the point of their phone lines being unplugged and emails shut down due to the high volume of wild horse supporters on this issue.

We are doing all of these things daily, but there still has been NO change.

It’s time for the PONY EXPRESS!!!

The deadline is September 1st, so please help get the word out.  It’s the simple click of a button.  Go to Saving America’s Mustangs and click on the banner that says Madeleine’s Pony Express down on the right hand side of the page.

Then, stay tuned as we wait to see that incredible day when one of this country’s most formidable animal welfare activists literally takes Washington DC by storm.

Following are some links to more information on Madeleine Pickens and the wild horses: