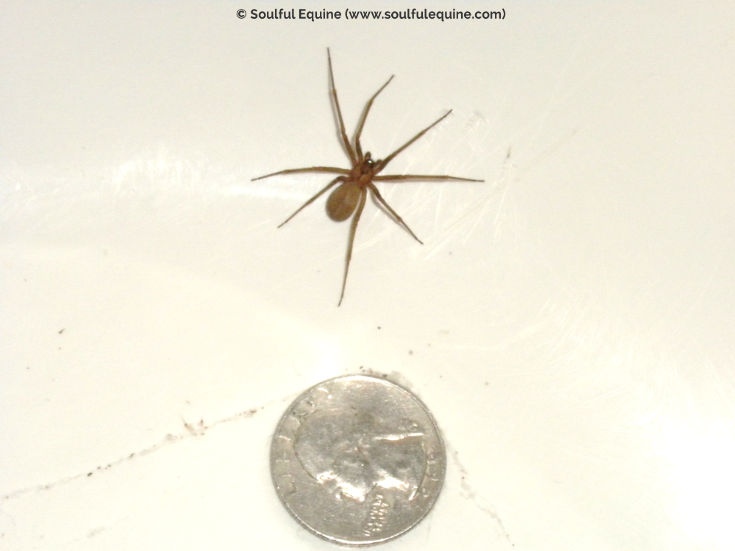 The brown recluse’s venom is different from that of the black widow in that it doesn’t affect the nervous system.  Instead, it is a necrotic toxin that acts directly on the skin and muscles to kill the tissues immediately surrounding the bite.  In addition to the dead tissue healing slowly, if at all, severe cases can result in toxic shock and kidney failure.  If you’ve ever seen pictures of human arms and legs that have been bitten, you completely understand how nasty this tiny creature can be.

They hang out under rocks, in loose papers, boxes, clothing, bedding, and shoes.  As it’s name suggests, it’s rarely an aggressive spider and it usually bites only when pressed against the skin, such as when tangled up within clothes, bath towels, or in bedding.  For those living in areas with these spiders, it’s good to make it a habit to shake out clothing and shoes before putting them on and to check inside your bed before climbing in each night.

If you’ve ever had the misfortune of being bitten, or if you know anyone who has been, you understand how horrible the results can be.

Now For The Entertainment Portion Of Our Show

Although brown recluse spiders and their bites are nothing to laugh at, I did have a situation occur some time ago, that I now look back on with a smile and with great gratitude.

It all started as a nice, quiet day in the country.  I was at home alone sitting at my desk working on my computer when I had an itch on my ear and reached up to scratch it.  When I did, I felt this tiny little bump on the inside ridge.  Wondering what the heck it was, I got up and went into the guest bathroom to look in the mirror.

I couldn’t believe what I saw.  There was a tick in my ear!

I don’t know if you have any experience with removing ticks, but they’re tough enough to get loose even when you’re able to get a good grip on them.  So with it in such an awkward location, and the fact that I don’t have eyes in the side of my head, I was having an extremely difficult time extracting the little sucker.

So I picked up the phone and called my neighbor.  Fortunately, I knew her well enough to ask if she would mind removing a tick from my ear.  Her maternal instincts kicked in and she said “of course!” and headed out the door to come to my rescue.

Since I had been having a leisurely day working in my office, I was still in my pajamas, so I decided I’d better change into something a little more presentable.

I went to my room and got out a t-shirt and came back to the bathroom to change.  Standing there in the bathroom I pulled my pajama top over my head and sat it on the sink to reach for my t-shirt.  As I did, I noticed in the mirror that there was something on my bare shoulder.

“What the heck?” I thought.  As I leaned over to get a closer look in the mirror, I realized it was a spider.

I Hate It When Women Scream

As I tried to focus in to make sure of what  I was seeing, I heard someone start screaming.

Then I realized it was me!  (How embarrassing.  I hate it when women scream.)

Before I knew it, my legs had a mind of their own.  They started running down the hall!  And that same woman, the one who was screaming at such an embarrassing pitch, grabbed the hand towel that was there on the sink, and started trying to swat the thing off my shoulder.

I would assume that anyone who might have approached the front of the house just at that moment would have seen quite a performance.  That woman (I’m still certain it wasn’t me) was screaming, running topless down the hallway and hitting herself furiously with a towel.  It would have been enough for any observer to dial 911 and suggest a paddy wagon be brought to this address ASAP!

After one complete trip down the hall, and a turn back toward the bathroom, screaming and swatting the entire time, I managed to knock the little leech off my shoulder before I got to the end of the hall.  I ran to look in the mirror just to make sure there weren’t any other stowaways on board.

When I was satisfied that I was arachnid-free, I went back down the hall, still topless, to find the little creep.  There he was near the front door… somewhat dazed but still moving.

I went to the kitchen to get a jar and a lid to capture the culprit to show my neighbor.

Oh yes, my neighbor was on her way!  I ran to grab my t-shirt and cover my nude-ness.

When she arrived, she removed the tick and we had a good laugh as I described the streaking moment she narrowly missed.

After she left, I later looked closely at the spider and I thought I saw what could be identified as a fiddle on his back.  I knew that brown recluses were called fiddlebacks, but I had never seen one.  Not even a photo of one.  I went online and started trying to identify my little non-friend.

What I found terrified me.  It was, indeed, a brown recluse.

I have since had similar spiders in my house identified by professionals and know now, without a doubt, what a brown recluse looks like.  As it turns out, I had seen many of these throughout my life in Texas and I never realized they were brown recluses.

Thank God For My Guardian Angels

So, I was extremely fortunate that day.  I had one of the most poisonous spiders in North America riding around on my shoulder for who knows how long.  I still have no idea how he got there nor do I know why he never bit me.

If it hadn’t been for my guardian angels, this story could have turned out much differently.  They were watching out for me and used a tick to get my attention.  And then, what are the chances that I would have changed my top standing in front of my bathroom mirror?  I can’t even think of another time I’ve done that.  Sure, I look in the mirror AFTER I’ve changed, but not WHILE I’m changing.

So I still, to this day, think back and smile.  Sometimes I laugh out loud when I imagine what I looked like through those windows running down the hall topless screaming and smacking myself with a towel.

And always, I give thanks to the angels who were taking care of me.